The International Collegiate Programming Contest (ICPC) is an algorithmic programming contest for college students. It is the oldest, largest, and most prestigious programming contest in the world. This year’s Greater New York Regional Contest was hosted Sunday, October 27 at New Jersey Institute of Technology (NJIT). 66 teams from 24 universities, including Cornell, Colombia, Princeton, and Yale, competed for the title of Greater New York Regional Champion. The team “Cornell TankCadets” from Cornell prevailed.

It was a very close win for Cornell. The Cadets were in second place in the final phase of the competition, but outpaced its competitors with one last-minute submission addressing one remaining unsolved problem. Haobin Ni, the Cornell ICPC head coach, said: “I am very proud of our team’s never-giving-up spirit.”

The official ICPC contests, including this year’s Greater New York Regional Contest, have rules that foster collaboration, creativity, innovation, and the ability to perform under pressure. Teams of three, representing their university, worked together to solve a challenging problem set of ten-to-twelve problems in five hours. To solve a problem, a team must submit a piece of source code that could produce the desired output on all the test cases within the problem’s time limit. The winner is decided by the number of problems solved and the time spent solving those problems.

By winning this regional contest, Cornell advances to the North American Championship. The Cornell team will compete against all of the other regional winners of North America at Georgia Tech in February 2020.

Cornell has also won its placement in the ICPC World Finals, which is the grand finale of several official ICPC contests. All of the best teams worldwide will gather in Moscow in June 2020 to compete for the title of ICPC World Champion.

This year, Cornell ICPC sent seven teams to the Greater New York Regional—twenty-one students in total—which is the second most in number next to the host institution, NJIT. The members of the award-winning team (from left to right in the photo) are: Aaron Lou (Junior), Horace He (Senior), Jyun-Jie Liao (Ph.D.), and Haobin Ni (Ph.D., Coach) 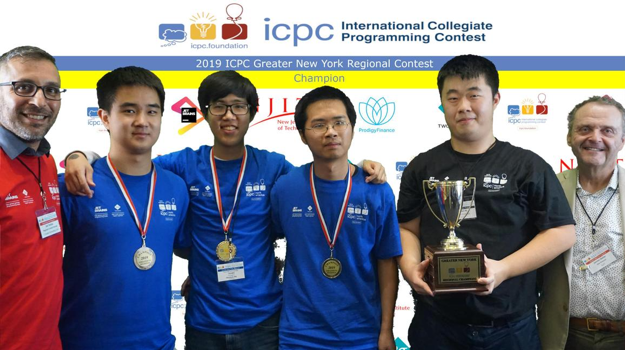 As a student organization, Cornell ICPC, previously known as Cornell ACM, is dedicated to providing resources and opportunities for Cornell students to succeed in programming contests and also in their careers. Besides participating in ICPC contests, Cornell ICPC also prepares our teams through training and organizing programming-related contests all year round at Cornell, including Big Red Cup, a yearly Cornell-based programming contest open to all undergraduate and graduate students. The organization also is involved in CS 5199: Competition Programming and Problem-Solving Seminar with Professor Robbert van Renesse, a course aimed to provide a broader view of algorithms in practice and to strengthen students’ skills in problem-solving.