Divine Maloney is only in the fourth year of his doctoral program in human-centered computing at Clemson University, but already has several peer-reviewed articles and refereed conference papers under his belt.

Wendy Roldan, a fourth-year Ph.D. student in the field of human-centered design and engineering at the University of Washington, in 2019 won a $150,000 graduate research fellowship from the National Science Foundation.

And Abenazer Mekete ’22 is hoping to parlay his current summer internship as a software engineer at Microsoft, along with his passion for entrepreneurship, into a career in information science. 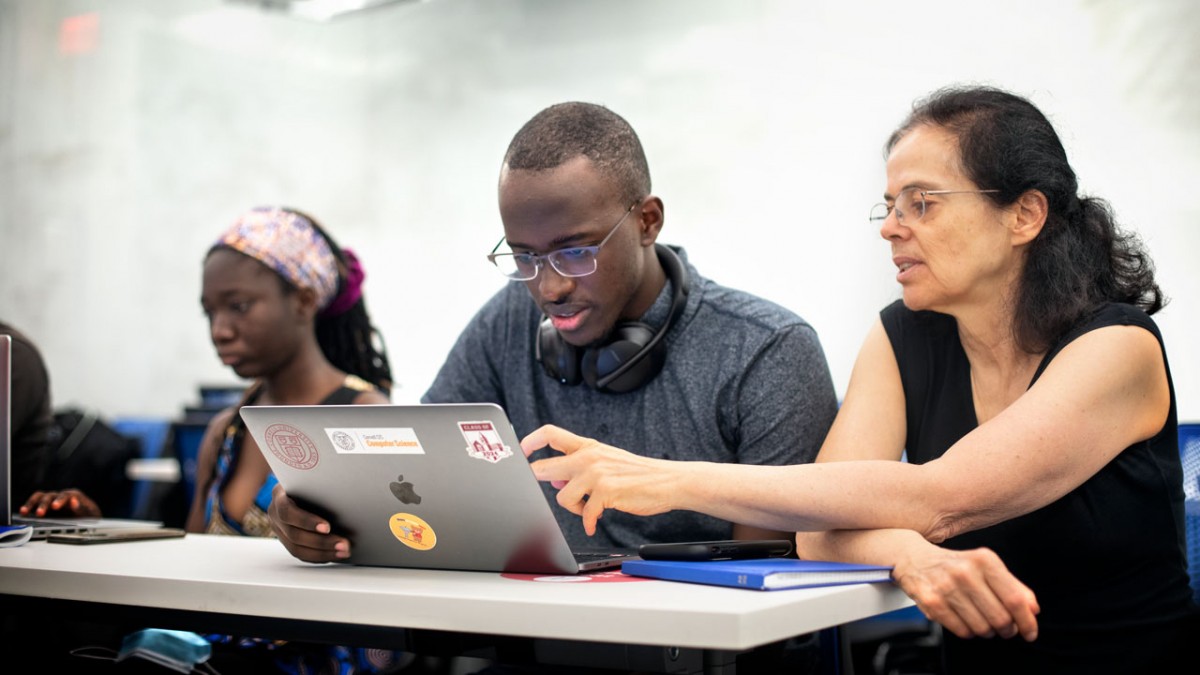 What do these high achievers have in common? All are underrepresented minority students who participated in Cornell summer programming designed to make computing and information science more diverse and less daunting for people traditionally scarce in those fields.

“I can confidently say if I didn’t go to that workshop, I would not be as successful as I am,” said Maloney, who received his bachelor’s in computer science and Spanish in 2017 from Sewanee: The University of the South, in Tennessee. “To me, it’s one of those things where everything really just lined up.”

“Cornell is now on the map—people look to us as an example of programs to run that increase underrepresented minorities at these higher-level programs,” said Hakim Weatherspoon, professor of computer science and co-founder of both SoNIC, in 2010, and CSMore last year. “And as a result, even if we haven’t directly got those students into our program, we’ve had other students apply and get in much more than we had in the past.” 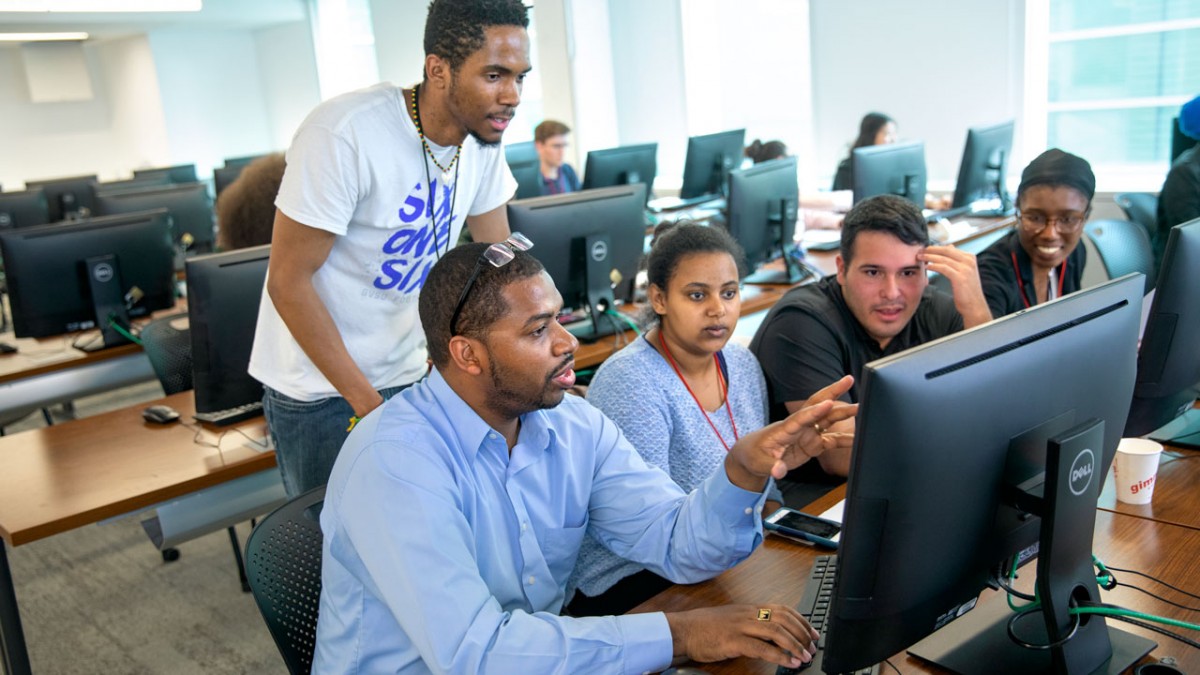 In the last 10 years, the number of CIS doctoral students at Cornell who are underrepresented minorities has gone from two (1.4%) to 22 (7.2%). And while women make up 18% of computer science students nationally, at Cornell it’s 38%—and when you include information science, that number jumps to 43%.

Overall, however, there is much work to be done. In 2020, more than 80% of all Ph.D. recipients in computer science nationwide were male, and just 19 of 1,691 (1.2%) were Black, according to the Computing Research Association’s Taulbee Survey.

“Computing is really changing all kinds of disciplines and all kinds of practices, and we really need to think carefully about the social impact of these technologies,” said Phoebe Sengers, associate professor of information science and of science and technology studies, and a co-organizer of the Design for Social Impact workshop.

“The key importance of increasing diversity in computing,” Sengers said, “is to be able to build technologies that really speak to, and reflect, the values of a much broader range of communities who can and should be stakeholders in the design of technology.”

Maloney said his week in June 2018 as an invited participant in the Designing Technology for Social Impact Workshop—in which students learn about designing technologies to promote alternative perspectives and positive social impact—was “an inflection point” in his academic career.

Roldan attended the same workshop and had a similar experience, noting it was about more than just academics.

“I think it was about the relationships I formed as a first-year Ph.D. student,” said Roldan, who met virtually with this year’s workshop participants. “Now I’m a fourth year Ph.D. student, and I’ve leveraged those connections with my peers, and with Phoebe (Sengers) and a lot of the speakers that came in during that session to help me succeed in my research career.”

Cyan DeVeaux, who’s headed to Stanford University this summer to begin her Ph.D. studies in communication, was invited to the SoNIC workshop in summer 2019, while interning at NBCUniversal as a media tech engineer. She received her bachelor’s in computer science and visual and media studies in 2020 from Duke University.

DeVeaux’s Cornell experience opened doors into academia that she didn’t even know were there.

“I think that the main goal of the program was to demystify what getting the Ph.D. meant,” she said, “and to show students—especially those from underrepresented backgrounds in computer science—why they should consider getting a Ph.D. and what a career in academia can look like.

“I knew I was interested in research,” she said, “but I was pretty unaware of what the application process was like and what it actually meant to get a Ph.D. So I think over the course of the program, it definitely helped clarify those things.”

Sengers referred to the “hidden curriculum” that all Ph.D. students must navigate, and which the Cornell workshops address.

“How do you actually write an effective fellowship application, or how do you put a job application together?” she said. “That might not get taught in your program, but it’s really crucial to success.”

The CSMore program is designed to give rising sophomores a leg up in computer science at a point when CS courses get more intense and many students falter. Mekete took part as a rising junior last summer, in the program’s first year.

“Number one, I gained a better understanding of what CS curriculum at Cornell is,” he said. “I also got to really build a good relationship with the professors who teach the upper level CS courses. And then there’s the insight into what these upper-level classes are like, and what to expect coming into them. Along with that, I got to build some really close relationships with the students in my cohort and build a support network.”

All three doctoral students stressed the importance of belonging to a community of scholars from underrepresented backgrounds—which the Cornell programs helped create for them.

“The [Designing for Social Impact] workshop really gave me confidence, and a network of people that I can count on,” Maloney said. “There are around 25 of us, and we’ve done our best to meet up on occasion, see how we’re all doing, attend each other’s talks and dissertations, that sort of thing.”

“I’m a woman, I’m Latina, I’m first-generation [college student], I come from a low-income background,” Roldan said. “And there are very few people like me in my program, in Seattle, in all these different places. But when you come together with this group, you’re like, ‘Oh my God, we’re all people of color all in this room; this is awesome.”

And they know firsthand the value of mentorship, and are eager to go from mentee to mentor.

“If someone reaches out to me and wants to talk about my experiences, my journey, or to get advice, I’m always happy to hop onto a one-on-one,” DeVeaux said. “Something I live by is to ‘lift as you climb.’ So as I learn new things, I want to make sure that I pass on what I’ve learned to the people who are in earlier positions in their journeys.”

Weatherspoon said belonging to a cohort through participation in one of these three summer programs is powerful and empowering, and one of their most valuable benefits.

“These programs create a group of people who know each other, and it reduces their barrier to support and to some of these things that they may have thought were challenging before,” he said. “And they boost each other’s confidence and morale. That’s maybe as significant as anything.”

This story first appeared in the Cornell Chronicle.