I got a few questions about my setup for recording the course videos for CS 6120 this fall. While I have no idea what I’m doing, here are some notes on the hardware and software I settled on.

All webcams are terrible, and the less-terrible ones are only available on the black market for 1 million dogecoin apiece. I’ve been using Reincubate Camo, an app that uses an iOS device’s actually-good camera as a webcam. There are other apps that do this, but all the other ones I tried were crappy and broken. I used Camo first with an old iPad and now, less awkwardly, with my iPhone SE. The result so so much better than my iMac’s built-in webcam that doing the below side-by-side comparison between the two made me make this face.

I have tried an embarrassing and expensive array of awful “speakerphone” products that somehow sound worse than my laptop’s built-in mic. Every one of them makes me sound like a 32 kbps MP3 of a call from a payphone in hell. Then I remembered that I have a Blue Yeti that I bought from an old roommate back when podcasting was cool. It sounds great. It seems like any proper, standalone USB microphone would be fine as long as you can get it close to your face.

I hastily bought a cheap tripod for the iPhone-as-camera and a microphone arm that clamps onto the edge of my desk. I say “desk” here, but for most of CS 6120, it was a piece of scrap plywood balanced on top of the open top drawer of my dresser (not pictured; I have a real desk now).

I set the tripod up behind my iMac so it’s not too awkward to look directly at it. At first, I tried one of those knobbly squidlike tripods, thinking I could dangle it off the corner of my screen, but that turned out to be impossible—I don’t recommend those things. 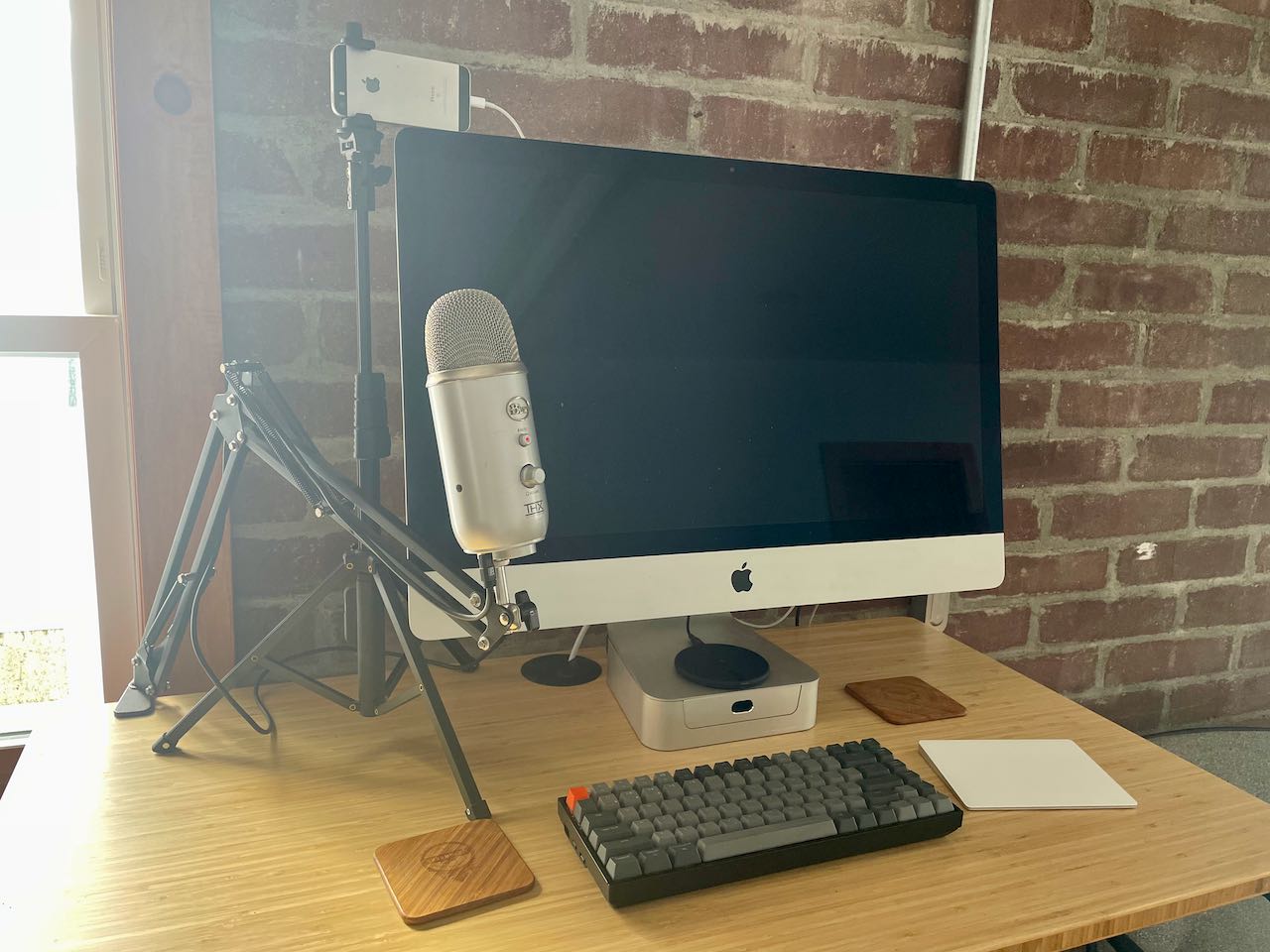 The CS 6120 videos have me either explaining things by scribbling on an iPad or demonstrating things by typing in a text editor. For the former, I use Notability. Although I’m sure there are many other apps for this, possibly better ones—it’s just the one I’ve been using forever (including when I taught the same class in person).

I use ScreenFlow to record and also to edit the video, including superimposing the recording of me over my iPad scribblings or my desktop and inserting ridiculous royalty-free music. I have used ScreenFlow for a long time to record conference talks. It’s not cheap but it’s the best. They have educational discounts. 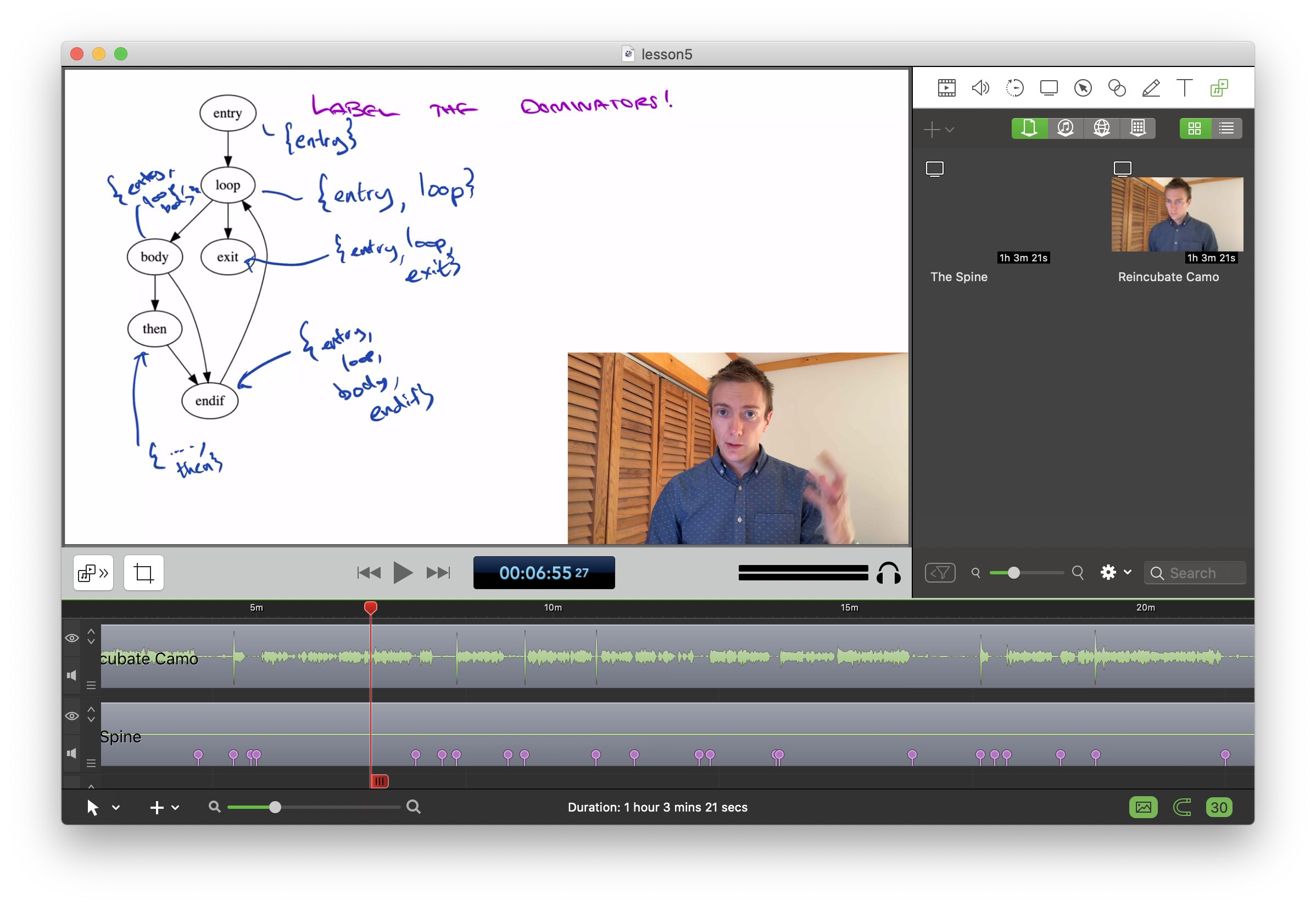 Editing videos takes me a long time because I make lots of mistakes. Here are my only tips for making it a little less painful.

I try as hard as I can to pretend that I’m doing a live, in-person lecture in a real classroom, where there’s no editing and mistakes are just part of life. I never stop recording and try to just keep on truckin’ when I screw up.

Somehow, that attitude is unbelievably hard to maintain, and every few minutes I still get sufficiently derailed that an edit becomes inevitable (e.g., I lose my train of thought, mutter swear words, and pace around the room for a minute before getting back on track). For those, I use ScreenFlow’s feature where you can press a hotkey to make a marker in the timeline to indicate that you want to edit something there later. Then, when editing, I can just jump between markers—I never watch the whole thing all the way through, which saves a ton of time.