A Type and Effect System for Deterministic Parallel Java

With the end of Moores’ Law around 2000, to further improve the compute power, the advent of multicore processors demands the behavior of parallel programming. And the dominant model is the multithreaded shared memory programming. It is inherently complex due to the possible thread interleavings that caused the nondeterministic program behaviors. This nondeterminism causes subtle bugs including data races, atomicity violations and deadlocks.

To avoid the nondeterminism, the parallel programmer applies locks and semaphores to enforce the deterministic programming. But this task is tedious, error prone, and challenging.

Thus, the authors choose this method to simplify the parallel programming in Java by introducing deterministic semantics.

Specifically, they introduce region path lists (RPLs), which enable more flexible effect summaries including effects on nested structures. They introduce an index-parameterized array type that allows references to provably distinct objects to be stored in an array while still permitting arbitrary aliasing of the objects through references outside the array. They also define the notions of subarrays and partition operations to enable in-place parallel divide and conquer operations on arrays. They also introduce an invocation effect with simple commutativity annotations to permit the parallel invocation of operations that may interfere at the level of reads and write, but still commute logically, i.e., produce the same logical behavior.

Disjointness: if we know that effects on two Region Path Lists (RPLs) R1 and R2 are noninterfering, we say that R1 and R2 are disjoint.

We can define a special array type with the restriction that an object reference value o assigned to cell n (where n is a natural number constant) of such an array has a runtime type that is parameterized by n. If accesses through cell n touch only region n (even by following a chain of references), then the accesses through different cells are guaranteed to be disjoint. Such an array is called index-parameterized array.

To represent such arrays, the authors introduce two language constructs:

A familiar pattern for writing divide and conquer recursion is to partition an array into two or more disjoint pieces and give each array to a subtask.

The authors formalized a subset of DPJ, called Core DPJ as a sequential language. For more details about the syntax, static and dynamic semantics, please refer to the paper.

The authors extended Sun’s javac compiler which compiles DPJ into common Java source. And they built a runtime system for DPJ using the ForkJoinTask framework that will be added to the java.util.concurrent standard library in Java 1.7. The benchmark used for evaluation are parallel merge sort, two codes from the Java Grande parallel benchmark suite (a Monte Carlo financial simulation and IDEA encryption), the force computation from the Barnes-Hut n-body simulation, k-means clustering from the STAMP benchmarks, and a tree-based collision detection algorithm from a large, real-world open source game engine called JMonkey.

The authors use DPJ to express all available parallelism for the benchmarks (Merge Sort, Monte Carlo, IDEA, K-Means, and Collision Tree), which shows the expressiveness of DPJ. 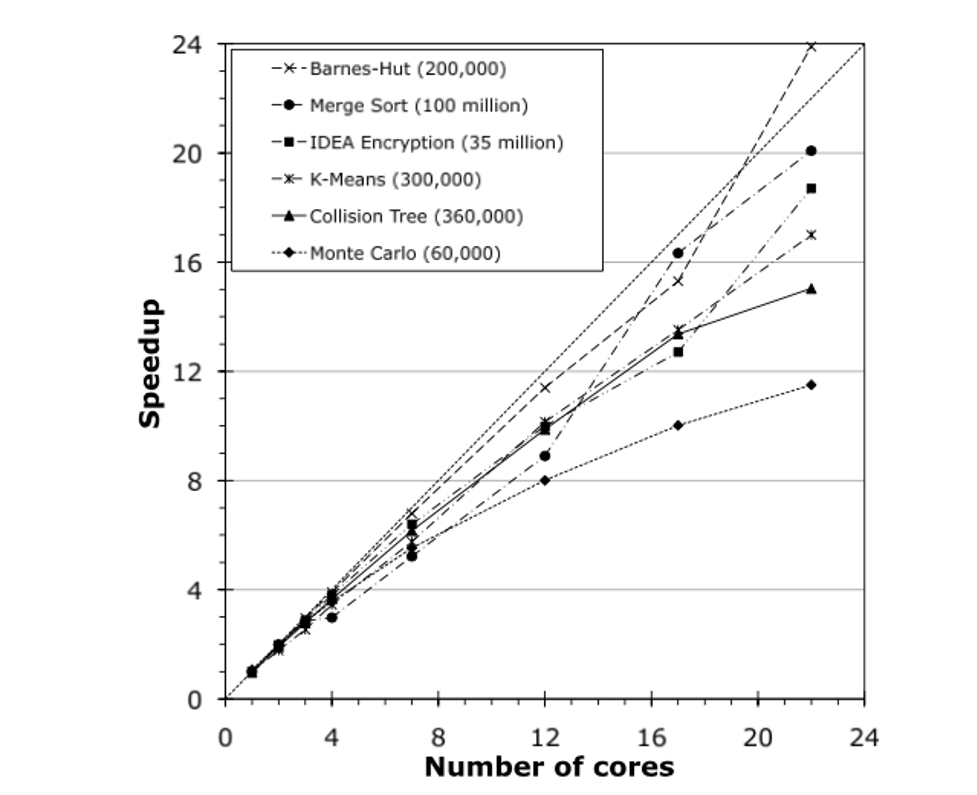 The figure shows the DPJ version speed up compared with the equivalent sequential version of the program. As we can learn from the figure, the actual speedup is reasonable compared with the ideal performance gain, thus proves that the DPJ adds negligible runtime overhead for achieving determinism.

The following table shows the efforts required for changing the Java source code to the equivalent version in DPJ. Programmers need to modify about 10% of the original code, and most of them are about writing RPL arguments when instantiating types, followed by writing method effect summaries.

Specifically, the programmer is responsible for designing the interface of the parallel program or kernels, specifying the mathematic equations related to the input and output values. The mathematic equation should be broken down into sub-equations to separate the process that is supposed to running in serial or in parallel. Then the programmer should specify the equations that they think should be running in parallel and the number of threads used for exploring the parallelism. Finally, the compiler will try to parallelize the key equations and execute the program.