Compilation-Based Execution Engine for a Database

My project was to implement a compilation-based execution engine for a database. The code is located here.

Existing database systems initially convert a SQL query to a tree of relational algebra operators and then interpret that plan. In the past, this wasn't a bottleneck as the main cost of processing data was reading and writing data to disk. Since the amount of CPU time spent processing data was negligible compared to the disk access time, the overheads of interpretation didn't play a large role.

The initial step of any database is to convert SQL to a tree of relational algebra operators.

For example, this query gets converted to the following tree of operators:

Joins are implemented by creating a hash table of one of its inputs and then for each tuple of the other input, concatenating it with any matching tuple in the hash table. Similarly, grouping is done by maintaining a map of the group by values to a bucket that contains all values in the group. Then, each aggregation function is computed over each bucket.

Most existing databases use interpretation to generate the output. This is generally implemented by having a produce function for each operator. When you call it, the operator will call a produce function from its child operators which returns the next tuple (or null if it's done), process that tuple (filter by some condition, execute a map function, join data, etc.), and then return the processed tuple.

For example, this would be what is executed for the interpreted version of Filter(Scan(T), CompExpr(LT, ColRef(x), Literal(5))):

While easy to implement from a system point of view, this leads to a lot of overhead as you have a function call boundary at each operator. This means values that are in registers need to be spilled and you have to invoke a virtual call which is expensive.

This should be much faster since there are no function calls (let alone virtual ones) and since tight loops are generated, values are kept in registers for as long as possible. Our goal is to generate code like the above and then compile and execute it.

To generate code for an operator tree, we introduce produce and consume functions for each operator. Produce generates a loop over the tuples in an operator's result. Consume is called by an operator's child surrounded by a loop over its result tuples. Effectively, produce signifies to "pull" tuples from an operator while consume "push"es them. Expressions have a produce function that generates code for calculating that expression. This idea comes from a paper by Thomas Neumann in 2011: "Efficiently Compiling Efficient Query Plans for Modern Hardware".

To see this in action, let's consider the following psuedocode implementations for Scan and Filter:

It's worth taking some time to appreciate how elegant this is and check that it does indeed do what we want. I was positively awestruck when I first came across it.

Special care is needed for joins and group bys since they store some of the input into a hash table and then loop over it later. Here's some psuedocode for a hash-based join:

I chose to focus on the compilation aspects of the project and implement just enough of the database elements to get full queries to execute.

We build up a basic storage engine by allowing user specified CSVs to be converted into our specific column files. Users can specify a catalog of these tables and column files in C++.

Queries over this catalog are written in C++ by constructing a tree of our operator classes. Then, this can be executed by invoking the code generator and then compiler on this operator tree.

I map each of the SQL types to the following underlying type:

The file format used for a table consists of each of the columns stored as a separate file. The format of each column depends on its type:

To avoid having to implement a buffer pool manager and on-demand paging, I mmap the column files and rely on OS paging to handle this. I simplified the experiment code behind this paper for the implementation.

Since parsing and query planning/optimization are not the focus of this project, I've not implemented these. Rather, I manually enter a tree of relational algebra operators and then compile and execute that.

This is fairly standard. We introduce a base Operator and Expression class that is inherited by respective implementations. Each one can hold any number of child operators or expressions.

The only thing of note is that operators need to keep track of the schema that they output. For example, a table scan would have some or all the underlying table's columns in its schema. A filter operation would have the schema of its child. A join would have the schema of the concatenation of both its inputs. A group by would have the schema of whatever aggregation functions are defined on it. To handle the general case and allow for eager removal of unnecessary columns, we associate an array of expressions as the output schema where each expression computes a function of the input schema values. While most databases implement such functionality by adding map and project operators, creating a matching expression for each column in the output schema simplifies this. I learned of this technique by looking through the implementation of NoisePage.

We generate C++ code directly to simplify the implementation. All the types above are native C++ types that we can reuse in the implementation. For example, we can use int16_t, int32_t and int64_t for 16, 32 and 64-bit signed integers respectively. Code is generated within a compute function, extern "C" compute() {...}.

As mentioned in the design, we use the producer/consumer interface to generate the body of this compute function. Each operator in the tree needs to have a produce/consume function on it. While initially I developed these as plain functions that simply take in an operator as input, I quickly realized that the produce and consume function calls on the same operator needed to share state. For example, the hash join produce function outputs a hash table declaration while the hash join consume function relies on that same variable.

Because state needs to be shared, we could attach these extra state variables onto the relational algebra operators. However, for better separation of concerns, we create a wrapper translator object around each operator and then organize them into the same tree. This allows for per-operator state sharing without having to modify each of the plan classes. We use the visitor pattern to generate these translator wrappers.

Once the C++ file has been generated, we invoke clang on the file with optimizations turned on (-O3). We allow any C++ header defined in the codebase to be included. This enables us to reuse classes defined in the codebase such as the ones for file reading. This generates a dynamic library that we load into the database with dlopen. We retrieve the aforementioned compute function via dlsym and then execute it. Finally, we dlclose the dynamic library.

The specific benchmark suite I'm using is the TPC-H benchmark. The schema can be found in my code base in tpch/schema.sql. The underlying data is generated by an automated tool. This tool has various scale factors to run the queries at. Scale factor 1 means there is a total of 1 GB of data, 10 means 10 GB of data and so on. I'm running these experiments on my rather underpowered (and out of disk space) laptop so I ran it at scale factor 1.

The queries involved are a mix of filters, group/by aggregations and joins. I've selected a set of 5 queries out of the whole benchmark to run the compiler on (queries 1, 3, 6, 11 and 12). These queries are unchanged except for the removal of subqueries, order by and having clauses as I don't support them. The remaining queries were mostly the same with those removed so I chose to omit them since I had to manually convert them to a physical query plan.

Postgres is a popular database that uses an interpretation-style execution engine so I thought it was fit to compare against as a baseline. Since my code is single-threaded, I set max_parallel_workers to 1. I also set jit off. Postgres includes a very basic compiler that will generate LLVM code for expressions only and not operators. However, since I am interested in comparing against the interpretation version, I set this off. I'm running Postgres 13.

Postgres does store full table tuples packed on disk while I store them separately. This does mean we load less data which gives us an unfair advantage. To fix this, I created materialized views of each of the base tables with only the relevant loaded columns. For example, for Q1:

Then, you can rewrite the query to use this newly created lineitem_01 table. This way, Postgres and our system read the same amount of data from disk.

I also verify correctness by checking that the query results are identical in Postgres.

For both systems, I took total running times on the client. This means it includes time to print the result rows but I redirected stdout to /dev/null. While this does include time to execute query planning for Postgres, Postgres reports that it takes less than a millisecond for these on all queries so I've omitted values beyond the decimal place to account for the loss of accuracy.

None of the queries had a correctness error.

I ran 4 trials for each query and report the 95% (t-statistic) confidence intervals for the runtime. I report two columns for my system, one with the compile times omitted (so just the time spent actually processing the query) and also the total time for compilation and execution. 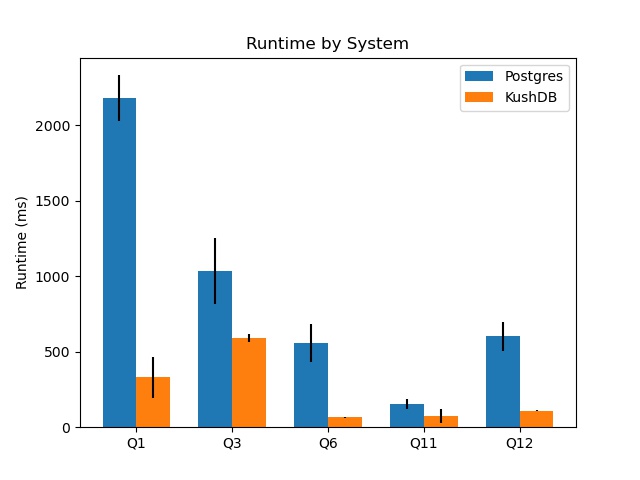 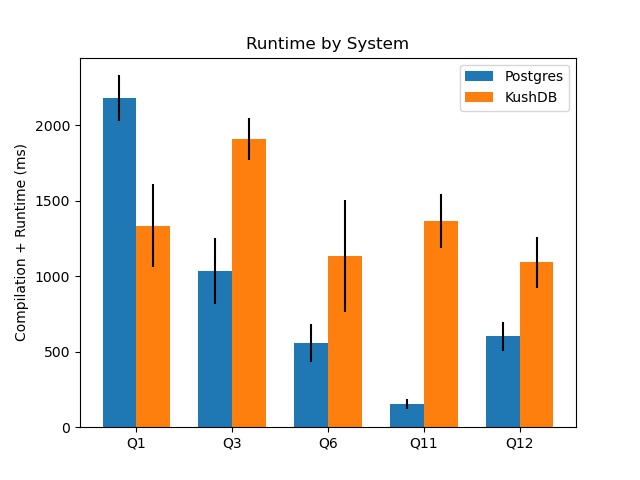 For all queries, the compilation version (once compiled) greatly outperforms Postgres or matches it in the case of Q11. I suspect that the noise of measurement outweights any improvement in runtime given how fast both systems execute the query. However, once we take into account the compilation time, a different result emerges. 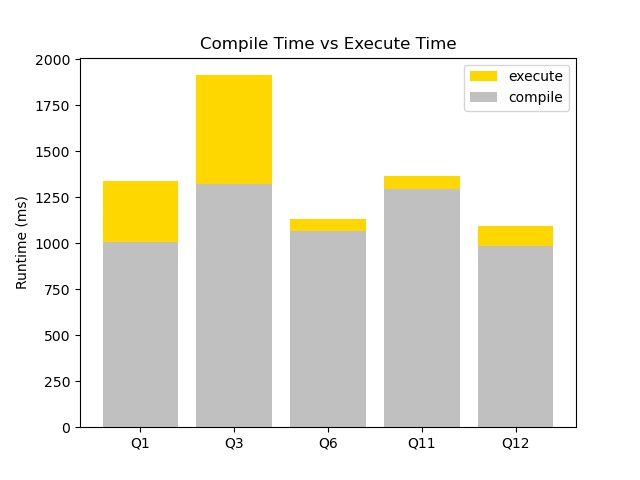 However, this is still unacceptable on smaller data sets where Postgres outperforms the compilation version. In future work, I discuss some ways that this can be fixed.

The largest barrier I had to overcome in working on this project was understanding all the pieces of the puzzle:

I also gained valuable experience building up a codebase that can easily scale. As an example, once I built in the functionality and infrastructure to specify arbitrary types, I could add in new types to the system with only 3 lines of additional code.

While this generates extremely high performant code, the time spent compiling is extremely large. The following strategies are useful in reducing this:

As always, there are a myriad of SQL features that I have not implemented as part of this project. Adding more features would allow me to test this more thoroughly.

Another aspect to explore is how best to parallelize the generated code. Existing techniques break the code up into the materialization boundaries and then use simple strategies to parallelize it.