In coverage for the Cornell Chronicle, Tom Fleischman writes about how the gift establishing the Cornell Ann S. Bowers College of Computing and Information Science came at "the perfect time." President Martha E Pollack and Dean Kavita Bala joined together at Cornell Silicon Valley (CSV) to articulate how Bowers' transformative gift "unlocks growth" for the new college established in her name. As Fleischman notes:

More than half of Cornell undergraduates now take at least one course in Cornell Bowers CIS. The university’s computing and information science fields have seen a sixfold growth in enrollment over the past decade. And increasingly, the technology realm is offering tremendous opportunities, as it impacts every aspect of human life.

Plans for a new building for Cornell Bowers CIS – made possible by Bowers’ landmark gift – will help meet that rising demand.

“The prospect of having more space unlocks our growth strategy,” said Kavita Bala, dean of Cornell Bowers CIS, in conversation with President Martha E. Pollack during the annual Cornell Silicon Valley event (CSV21), March 30. “And Ann’s partnership is the reason.” 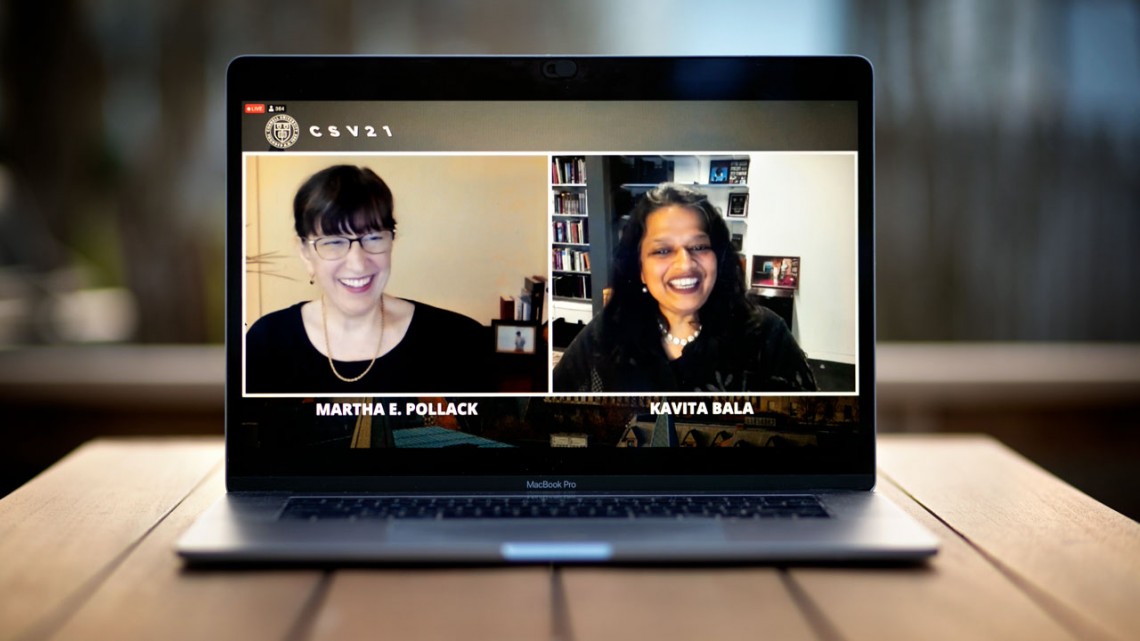 Virtual CSV21, with more than 1,400 registrants, began with a video tribute to 1959 College of Arts and Sciences alumna Ann S. Bowers, a Silicon Valley champion and Cornell trustee emerita.

“What a very, very special person Ann Bowers is,” Pollack said. “Her wonderful gift comes at a time when we really need that type of support, given the phenomenal long-term growth of interest in computing and information science by our students.”

“The CIS vision, when it was founded, was actually quite unique,” Bala said. “We recognized that it was not only important to develop technology, but it was also crucial to study and understand the impact of technology on people and society.”

“I find it a little hard to believe now, but when the Cornell CIS program was founded in 1999, it was actually controversial,” Pollack said. “The thinking, very broadly, was that tech was tech [and] people were people, and they didn‘t need to be studied together. But we felt differently at Cornell.”

Pollack and Bala spoke about the changes in store for Cornell Bowers CIS – including the new building, to be constructed adjacent to Gates Hall, the college’s current home. The added space is crucial, Bala said, to meet the growing demand in computer science, information science, and statistics and data science.

In response to the physical growth of the college, Pollack said the university has a plan to add faculty: Six new members will join the college, with another 15 planned “in the next few years,” she said.

“[That’s] something we couldn’t do if we didn’t have the new space,” Pollack said. “This new building is going to let us attract world-class researchers and give them the resources they need to succeed.”

Bala said Bowers’ gift also will fund student fellowships and investment in strategic growth areas, including robotics and Internet of Things research, which require more lab space than is currently available. “All of those changes taken together,” she said, “are going to make Cornell an even more exciting and fun place for innovation and research.”

Talking about the role of women in computer science, Pollack noted much room for growth. “Women are still significantly underrepresented in the field,” she said, adding that at the bachelor’s degree level, peak participation by women was 37% – and that was 37 years ago. Today, she said, it’s 18% nationally.

The president and dean then fielded questions. Bala was asked about how Cornell has increased female participation in Cornell Bowers CIS: “[T]his was through a really concerted effort on the part of incredible student organizations and deep faculty collaborations with faculty mentors, who are very committed to increasing diversity in our population.”

Regarding the need for a new building, particularly when so much is now being done virtually: “So much great research starts out through serendipitous interactions that can only happen in the same physical space. … Right now, what we’re seeing is we’re able to get by, of course, with Zoom. We don’t have a choice, it’s a pandemic … but we are missing out on all of the serendipity.”