Cornell Computer Science professor Kavita Bala, a leading expert in computer graphics and computer vision, who has served most recently as Chair of Computer Science, has been named Dean of the Faculty of Computing and Information Science (CIS).

On June 5, 2020, Provost Michael Kotlikoff made this announcement:

Dear Members of the Computing and Information Science Community,

I am delighted to share that Kavita Bala has been appointed the Dean of the Faculty for Computing and Information Science, effective Aug. 15, 2020.

As a distinguished scholar, teacher and administrator, Kavita is well positioned to continue to grow the reputation of CIS. Since 2018, she has provided tremendous leadership as chair of the Department of Computer Science, steering recruitment of leading faculty members and guiding student-focused programs to increase participation by underrepresented groups in computing and technology. Her work on computer vision, computer graphics and human perception has bridged academia and industry, with her innovations being adopted by leading companies and institutions. Among her many honors and appointments, Kavita is a fellow of the Association for Computing Machinery and recipient of 2020 ACM SIGGRAPH Computer Graphics Achievement Award, as well as numerous Cornell awards for excellence in teaching. She joined Cornell as a postdoctoral researcher in 1999 and has been a faculty member since 2002.

I’d also like to thank Jon Kleinberg for his steady leadership of CIS as interim dean for the past year, and I look forward to working with Kavita on continuing to grow the excellent reputation of CIS.

Here is a link to the Cornell Chronicle article about the appointment.

Professor Bala made this statement:

I am honored to be given the opportunity to serve as CIS Dean.

Let me start by extending my gratitude to Jon Kleinberg for his steady and thoughtful leadership as Interim CIS Dean during the past year, a turbulent time in our history.

I began my journey at Cornell as a postdoctoral scholar in 1999 just as CIS was starting to take shape. In CIS, I found a nurturing and intellectually exciting environment of world-class scholars who recognized early the profound importance of computing and information technology and its impact on society.

CIS is poised to meet the difficult challenges of our time through our vision of foundational and interdisciplinary research that explores cutting-edge, responsible technology for the future. As Dean, I hope to foster leadership in research and education through interdisciplinary collaboration across Cornell, and to strengthen the connections between the Ithaca campus and Cornell Tech.

Further, in this time of pain felt unequally by members of our community and society, I reaffirm our commitment to confronting problems of bias and to broadening participation in CIS. I am keenly aware of our responsibility to address inequities within our fields and beyond while educating the next generation of Cornell students to be agents of positive change.

I look forward to meeting you in person or virtually to learn about your hopes and aspirations for CIS. Please reach out to me.

The Cornell Chronicle featured this coverage of Professor Bala's appointment: 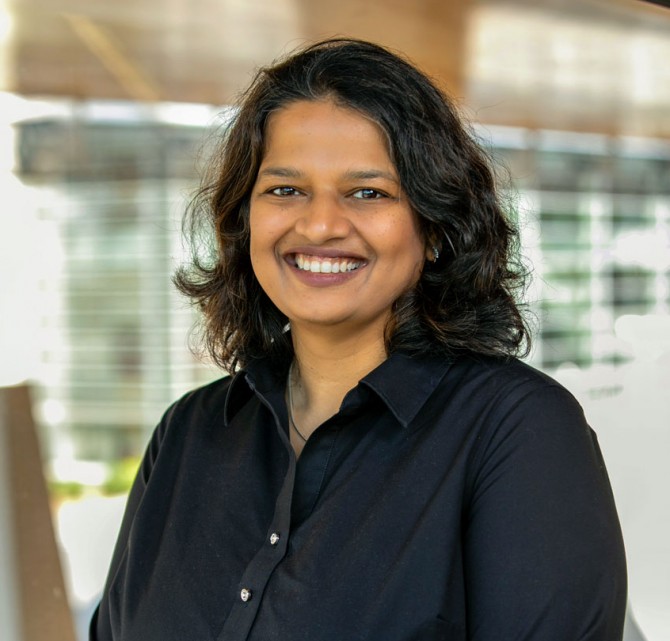 Kavita Bala, professor and chair of computer science, has been named dean of the Faculty of Computing and Information Science (CIS), Provost Michael Kotlikoff announced June 5.

Bala, a leading expert in computer graphics and computer vision, has served as chair of the Department of Computer Science since 2018. She will assume her new post Aug. 15.

Kavita Bala, professor and chair of computer science, has been named dean of the Faculty of Computing and Information Science. She will assume her new post Aug. 15.

“Kavita is one of our most distinguished scholars, as well as an experienced entrepreneur, as well as an outstanding teacher and administrator,” Kotlikoff said. “As a researcher whose innovative work crosses disciplines and frequently bridges the divide between academia and industry, she is an ideal leader for Computing and Information Science.”

Bala succeeds Jon Kleinberg ’93, the Tisch University Professor of Computer Science, who has served as interim dean of CIS since August 2019.

Bala’s appointment, which runs through June 30, 2025, was approved by the Executive Committee of the Cornell University Board of Trustees. CIS, a college-level unit, comprises the Departments of Computer Science, Information Science, and Statistics and Data Science.

“I am honored to be given the opportunity to serve as CIS dean,” Bala said. “Since its inception more than 20 years ago, CIS has been a trailblazer, recognizing early the profound importance of computing and information technology and its impact on society. CIS is poised to meet the difficult challenges of our time through our vision of foundational and interdisciplinary research that explores cutting-edge, responsible technology for future needs.”

CIS has experienced explosive growth in recent years, with its faculty teaching 1 in 10 Cornell students on the Ithaca campus. Its pioneering structure – with computer and information science researchers housed together in Bill & Melinda Gates Hall, and faculty affiliations spanning Cornell’s colleges – enables the study of technology’s ethical implications and encourages collaborations that touch nearly every discipline.

“Technology is transforming society and upending age-old institutions,” Bala said. “CIS has long recognized that technology can have a powerful, positive impact but can also have negative consequences. We believe that by understanding the societal impact of technology, we can design technology that improves people’s lives.”

As chair of the Department of Computer Science, Bala led aggressive recruiting efforts, working to expand the department’s presence in robotics and artificial intelligence, as well as supporting diversity among CIS students and faculty and increasing opportunities for undergraduate research and entrepreneurship.

As dean, her goals include fostering interdisciplinary research and educational initiatives; deepening connections between the Ithaca campus and Cornell Tech; and broadening participation in CIS.

“This is a time of unprecedented challenges that have disproportionately impacted people of color,” Bala said. “I’m keenly aware of our responsibility to address inequities within our fields and beyond, while also educating the next generation of Cornell students to be agents of positive change.”

Efforts to increase representation at CIS include programs such as the SoNIC summer workshop, which aims to encourage students from underrepresented backgrounds to pursue advanced degrees in computing, and the new Pre-Sophomore Summer Program in Computer Science, to help improve retention of underrepresented students in Cornell’s computer science major. CIS supports student groups including Women in Computing at Cornell and Underrepresented Minorities in Computing at Cornell, which help build community and support students from diverse backgrounds.

“We have great programs and organizations, and we face huge challenges,” Bala said. “There is much work for us to do together as we go forward.”

In her research, Bala specializes in computer vision and computer graphics, leading research in visual recognition, physically based rendering, and material modeling and perception.

She co-founded the startup GrokStyle, which drew Ikea as a client and was acquired by Facebook in 2019. Her work on scalable rendering technology has been adopted in industrial products for virtual design and prototyping. Her work on 3D mandalas was featured at the Rubin Museum of Art in New York City in 2008.

She is a fellow of the Association for Computing Machinery (ACM), was the recipient of the 2020 ACM SIGGRAPH Computer Graphics Achievement Award and has served as editor-in-chief of the journal Transactions on Graphics. She is the recipient of Cornell Engineering’s Fiona Li and Donald Li Excellence in Teaching Award (2015) and James and Mary Tien Excellence in Teaching Award (2006 and 2009).