Rediet Abebe, M.S. '18 and Ph.D. '19, became Cornell's first black female Ph.D. in Computer Science this past December. While at Cornell, she was advised by Jon Kleinberg, Tisch University Professor and Interim Dean of Computing and Information Science. Now she is heading to the University of California, Berkeley, to begin a professorship in the Department of Electrical Engineering and Computer Science.

In the Chronicle, Melanie Lefkowitz, caught up with Abebe in the season of her new appointment, in which "she’ll be the first black female computer science professor on her department’s faculty." Responding to that condition, Abebe notes:

“It’s easy to see that as a positive, and it is a positive. But it’s also a negative because it means I’m going to come into a space that was not built for me,” she said. “I’m going to be pointing out things that aren’t working for me, and I’m going to trust that people are going to engage with that meaningfully. For a junior researcher from an underrepresented background to feel heard and empowered and be taken seriously is the most important thing, and I felt like I had that at Cornell.”

After receiving a B.S. and M.S. from Harvard University and a Master in Advanced Studies in mathematics from the University of Cambridge, Abebe chose Cornell for her graduate studies largely to work with Kleinberg, whose mathematical approach and research on social networks she admired. She grew up in Addis Ababa, Ethiopia’s capital and a city of 10 million people, so she wasn’t sure how she’d adapt to Ithaca, but fell in love both with the university and its setting.

In the years since Abebe joined the Cornell community, more black and Latinx computer science doctoral students have enrolled: "In 2019, 14% of Cornell’s 35 incoming Ph.D. students in computer science were from underrepresented backgrounds, and 31% were women." 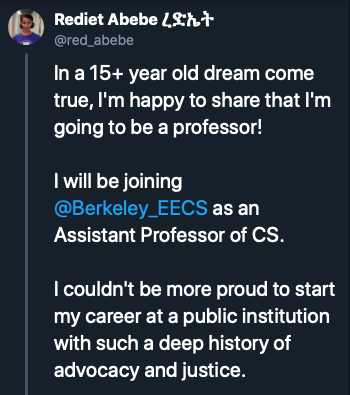 Click here for a digest of CS News coverage of Abebe.