The Cult of Posits

Computers are incapable of representing arbitrary real numbers exactly. This is due to two intractable facts of real numbers:

The design tradeoff between quantity and precision is captured by the number of bits dedicated to the mantissa and exponent.

In practice, however, the IEEE 754 floating point standard slightly modifies this scheme to account for two perceived limitations:

All this results in a glutonous representation:

The posit representation should be the most widely used representation. The numbers represented by posits are similar to floating points, but differ by the introduction of a so-called regime term, as follows:

In his seminal paper, Gustafson explains the genius behind this design:

The regime bits may seem like a weird and artificial construct, but they actually arise from a natural and elegant geometric mapping of binary integers to the projective real numbers on a circle.

The purity of posits is reflected in its effortless expression:

The Divinity of Posits 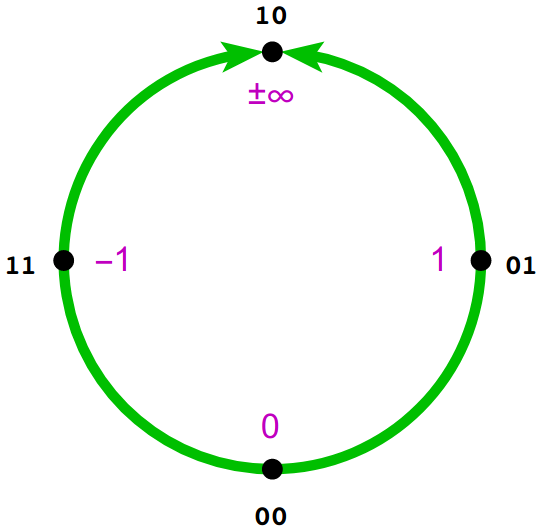 At the heavenly North of the circle, symbolizing the Alpha and Omega, Our Father to which we solemly pray, lies the glorious positive and negative infinity. At its opposite, the wicked, immoral South of the circle, lies nothing of value, the value $0$. Meanwhile, on the earthly plane, God's children enjoy free will, where they choose between positive one at the East and negative one at the West.

The quadrants induced by these points are then symmetrically populated by the rest of the points. The $useed$ determines where the "center" of these quadrants resides as follows: 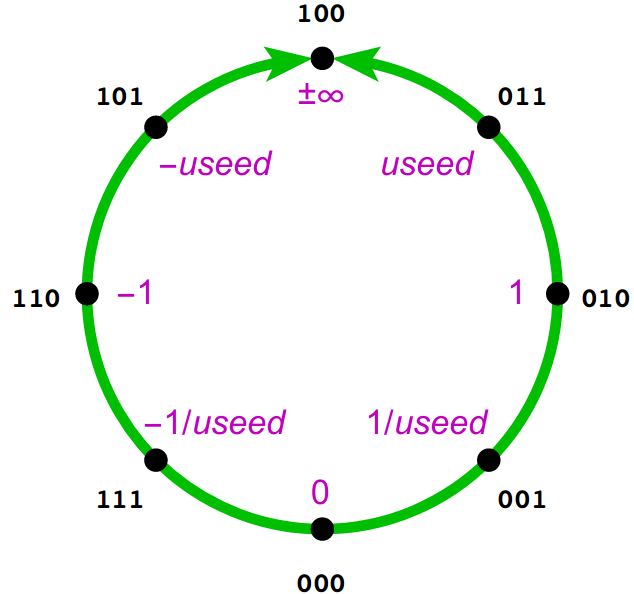 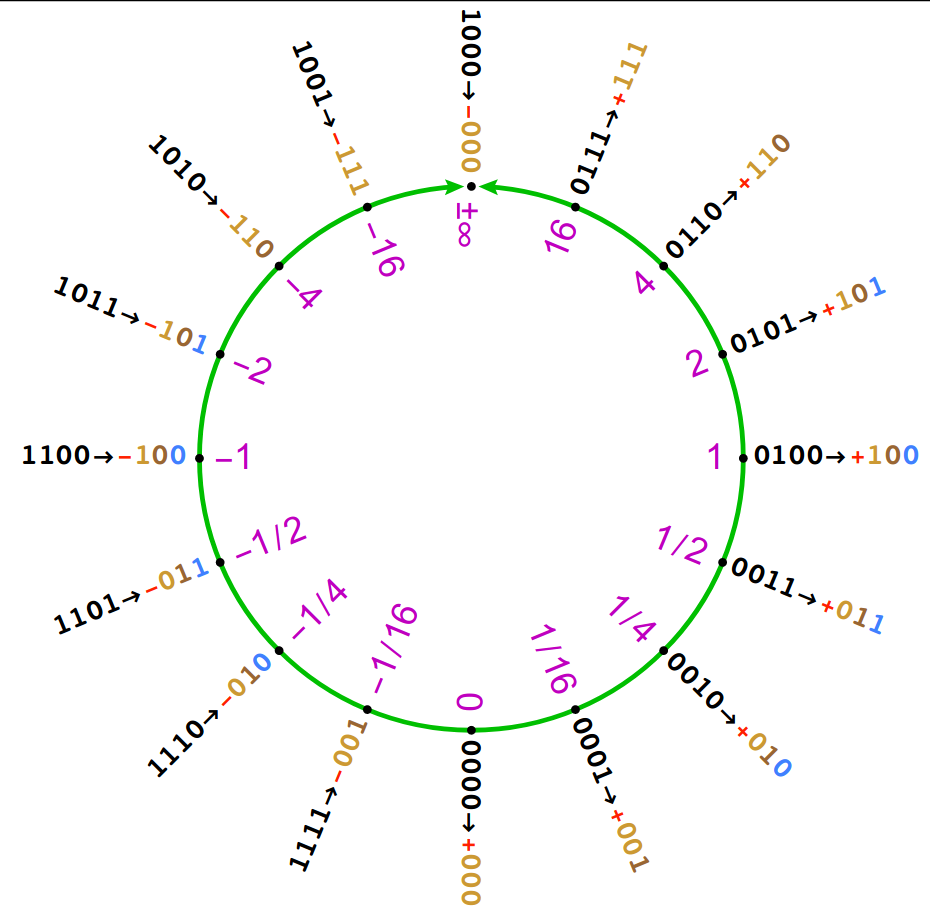 Tragically, we live in a fallen world, full of non-believers and doubting Thomases. This necessitates effective proselytizing that speaks not only to broken spirits, but also to faithless minds.

Often, this simple observation suffices to awaken floating point enthusiasts out of their delusion.

At other times, a more quantitive approach is called for; to this end, Gustafson proposes a variety of metric-based comparisons for numerical representation. First, he asks: how can we assess how accurately a number is represented in a given representation? To answer this, he proposes the decimal accuracy metric: the number of significant bits of a real number on a logarithmic scale, as in the decibel system.

Charitably, Gustafson elucidates non-believers why the logarithmic scale is the one true choice:

Thus, the "canonical position" of a (positive, non-zero) real number $n$ is given by $p$, where $n = 10^{\frac{p}{10}}$, and so it follows that the distance, or representation error, between a real number $n$ and its representation $n'$ is given by $| \log_{10}(\frac{n}{n'}) | $. A straightforward adjustment adapts this scheme to negative numbers as well, and we ignore zero, since posits represents it exactly. The inverse of this error which yields the perfect metric for accuracy. Equipped with this metric, we glean the significant digits of the representation, the decimal accuracy, by taking its base 10 logarithm.

We make two observations from this plot: First, posits distribute decimal accuracy symmetrically across representations, while floating points fail to deliver at larger numbers, which are ignored in favor of NaN. Furthermore, posits favor decimal accuracy at the meat of the number line, a sizable domain around 0, whereas floating points over-emphasizes the ends of the number line. Finally, posits represents more numbers: they cast the light of representation across a larger domain. In other words, the dynamic range of posits, a further metric, exceeds that of floating points.

Besides raw representation error, there is the possibility of errors generated from primitive operations. Gustafson addressed this for basic arithmetic operations by means of "closure plots". Such a plot visually depicts the accuracy of every combination of inputs. For instance, the multiplication closure plot below paints the input domain darker where more accurate results are achieved, as measured by decimal accuracy: 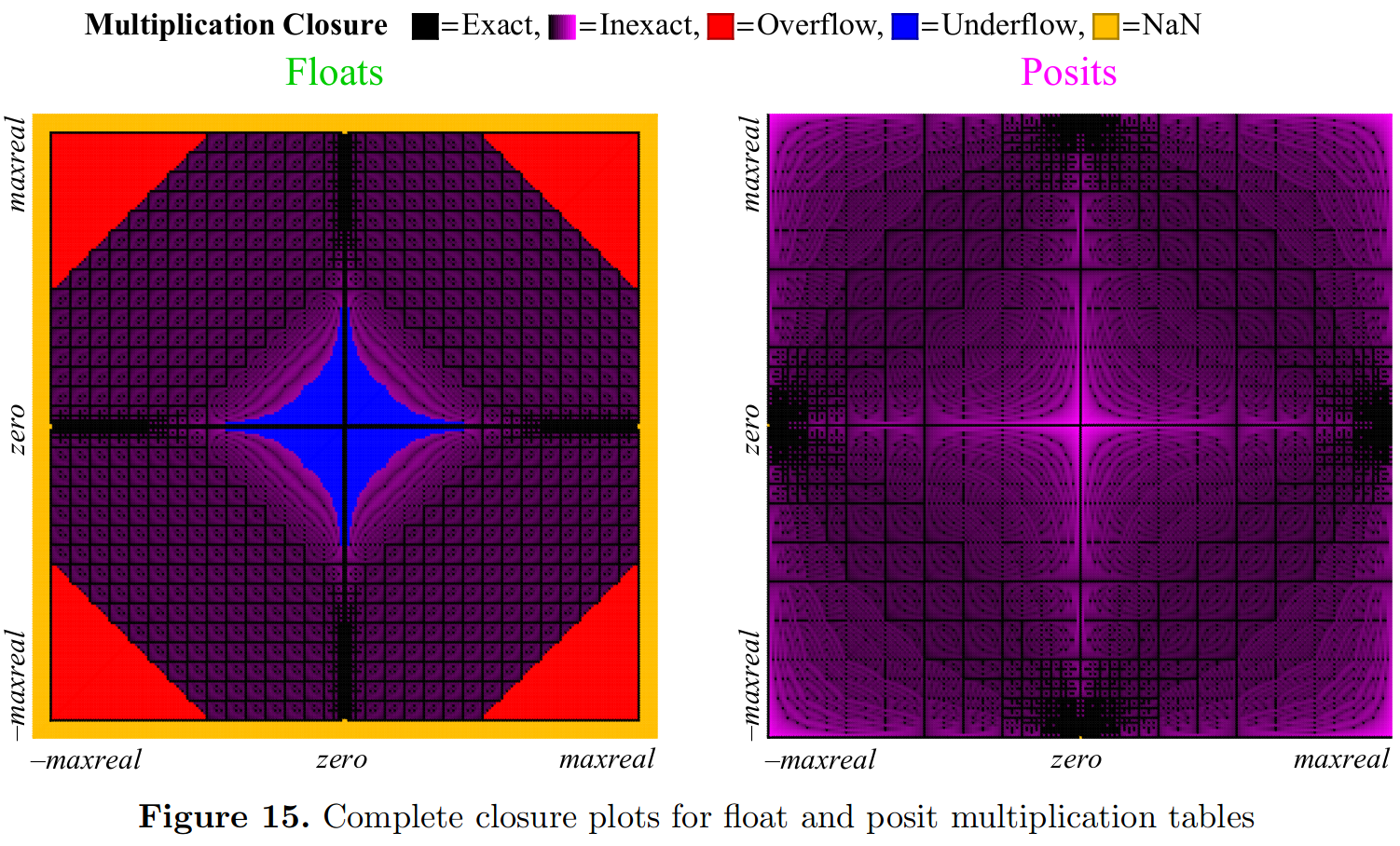 Accuracy of single argument operations between representations are compared by plotting sorted error. For instance, Gustafson compares accuracy of square root in the following plot:

As part of our cultist duties, we compare the accuracy of 32-bit floating point and posit representation by comparing their accuracy under a variety of benchmarks. In each benchmark, we express real number calculations in terms of operations over 64-bit doubles. In other words, the double type serves as the "oracle" baseline from which we compute accuracy. Each double benchmark is then compiled to LLVM IR, upon which we apply a posit LLVM pass and a float LLVM pass respectively to generate associated benchmarks.

Finally, we compute percent error by comparing float and posit benchmark results to the double baseline benchmark. We regard benchmark errors as arising from the inaccuracy that is characteristic of the particular 32-bit representation, compounded with successive operations. With our deepest apologies to Gustafson, we compute these errors on a linear scale, rather than a logarithmic one, and use these as metrics to compare the accuracy of the two representations.

We aimed for our float and posit passes to insert as much representation-specific functionality as possible into our benchmarks. The case of floats allows a full translation, since every double operation can be cast as a float operations. The case of posits lacked full support, however: we did not provide implementations for all existing LLVM double operations.

To accommodate both cases under one pass implementation, we designed our pass such that it first lowers each supported double operation and operands down to the target representation, subsequently lifting the result back to a double.

Since each rewrite has a purely local effect, we can avoid reasoning about complex allocation and type casting scenarios. Though computationally inefficient, this approach immediately supports all programs and is easily extendible.

In pseduo-LLVM, the general structure of a pass to type typ converts an arbitrary double operation op and its operands proceeds as follows:

The posit pass draws these components from external C functions implemented in Cerlane Leong's SoftPosit repository. In particular, we borrow the basic arithmetic operations (+, -, *, and /) over 32-bit posits.

We ran several benchmarks from FPBench that accomodated our limited selection of posit operators.

For each input, we calculate percent error for float and posit benchmark results, regarding the corresponding double benchmark results as the correct, "oracular" values. We chose computationally feasible sample sizes for each benchmark approximately using the heuristic $20^{vars}$, where $vars$ denotes the number of input variables for the benchmark, reflecting the need for more samples over larger input spaces. Inputs were linearly sampled over the valid input ranges specified for each benchmark. This simple strategy ensured that test cases would also include the case of exactly representable integers, in which all of the error arises from operation error. We report the mean and standard deviation of the percent error over all examined inputs:

As prophesied by Gustafson, posits consistently outperform floating points by orders of magnitude. However, our LLVM posit pass is grossly inefficient: it introduces loads and stores operations to convert between double and posit for each double operation. We blame this sad state of affairs on ignorant, non-posit architectures, which necessitate such a pass in the first place.

Gustafson shares what we're missing out on by not being woke:

A posit processing unit takes less circuitry than an IEEE float FPU. With lower power use and smaller silicon footprint, the posit operations per second (POPS) supported by a chip can be significantly higher than the FLOPS using similar hardware resources. GPU accelerators and Deep Learning processors, in particular,can do more per watt and per dollar with posits, yet deliver superior answer quality

Indeed, we could be talking in terms of POPS instead of FLOPS. Nonetheless, our pass allows us to simulate and give thanks for posit accuracy.

Our approach relies on treating the double type as the "ground truth" representation for benchmarks. Although this is an approximation, since no finite representation has perfect accuracy, we assume that the accumulated error in double benchmarks will be truncated or rounded off when comparing with the less precise 32-bit representations. In other words, we assume that casting to a double from a float or 32-bit posit can be done without loss of information. Although this assumption does not always hold, we found it to be sufficient for practical testing and justified the streamlined design of our LLVM pass.

Every morning and every evening, run your favorite posit benchmark and recite the following:

Confess your use of floating points, repent, and be cleansed. Contact the authors for induction into the Cult of Posits.