Halide is a domain-specific language embedded in C++ for writing code that processes images and, more generally, arrays. The main innovation of Halide is that it separates algorithm --- the actual function being computed -- from schedule --- the decisions regarding when to perform computations and when to store intermediate results. This allows developers to write the function that their image pipelines implement once and then performance-tune the implementation by swapping out schedules --- different schedules can be used for different platforms while not modifying function code.

Our autoscheduler is implemented in Python 2.7 and can be found at this repository.

The following presentation of schedules as trees manipulated by schedule transformers closely follows Chapter 7 of Jonathan Ragan-Kelley's thesis. The images below are from that document.

In order to search for schedule, we represent them as schedule trees, wherein the ancestry relationships between nodes represent ordering information. Schedule trees have the following kinds of nodes:

Schedule trees are considered well-formed if they satisfy the following criteria:

By convention the output function does not have a storage node in the schedule tree since it is assumed that storage for the output has already been allocated and thus there is no decision to be made about the granularity with which to allocate it.

For any function we can define the default schedule, which traverses the output function in row-major order and inlines all called functions, like so: 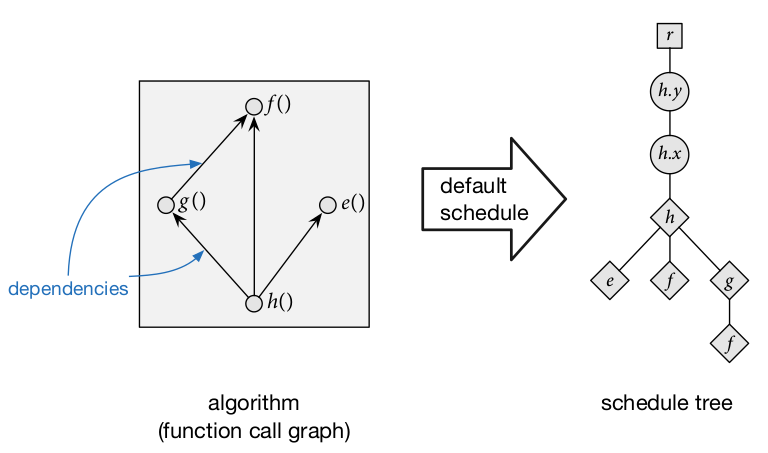 We can give a semantics for schedule trees as nested loops. Consider the schedule below for three functions, in, bx, and by, where by calls bx and bx calls in. The schedule tree on the left represents the nested loop on the right. 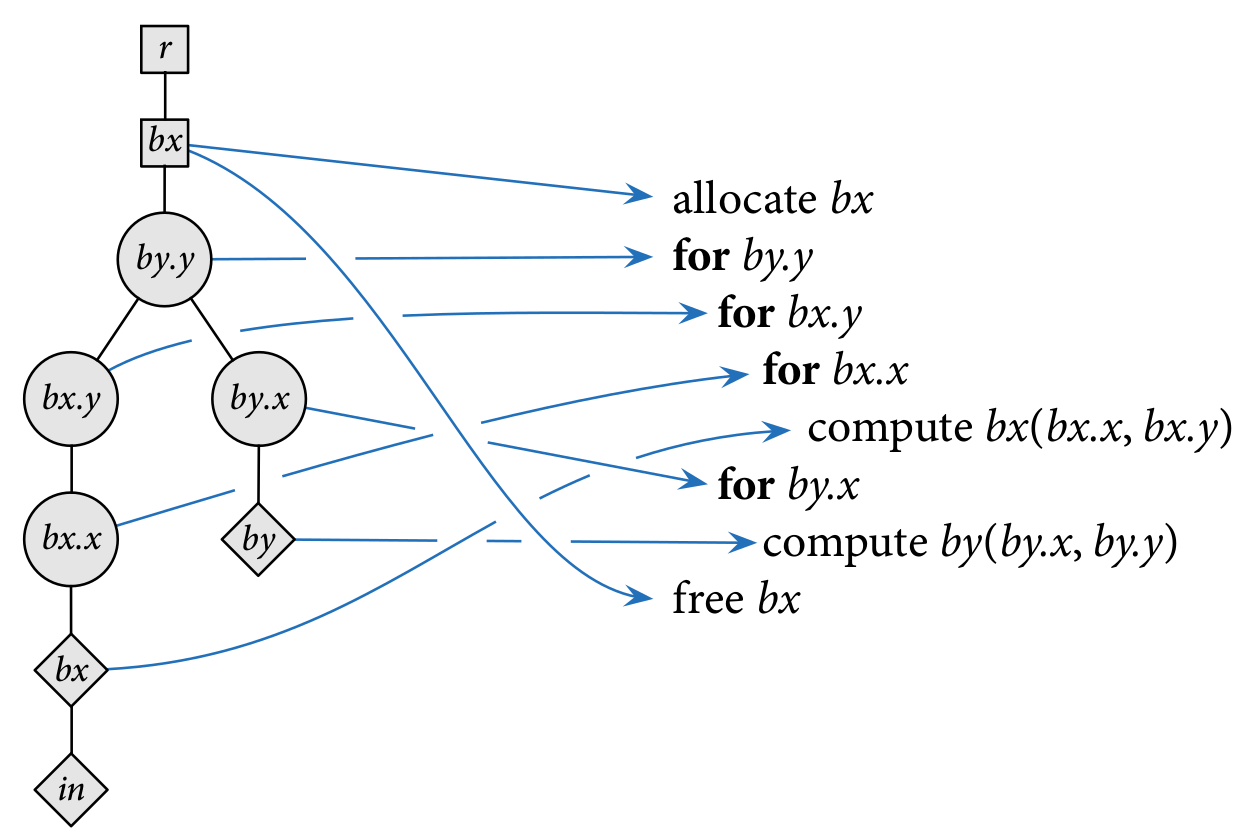 We define transformers over schedule trees. We use these to traverse the search space of schedules.

Below are some diagrams to give intuition to how these scheduler transformers work. 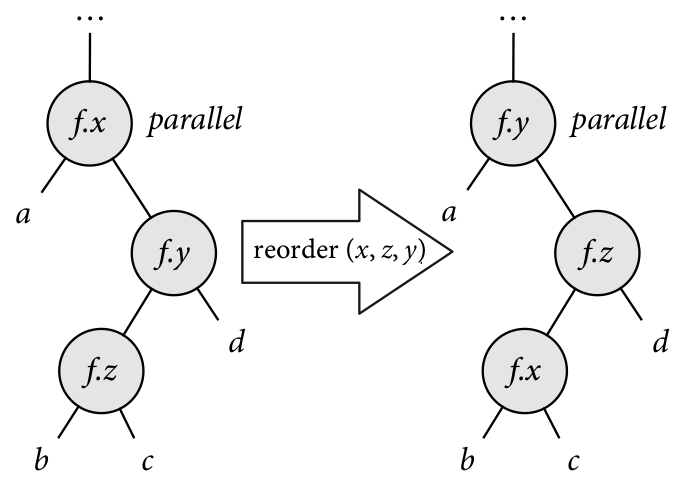 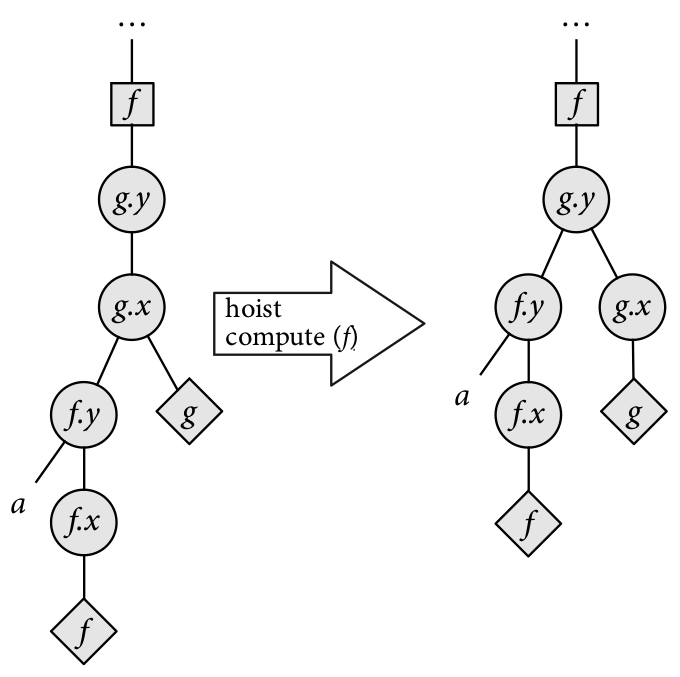 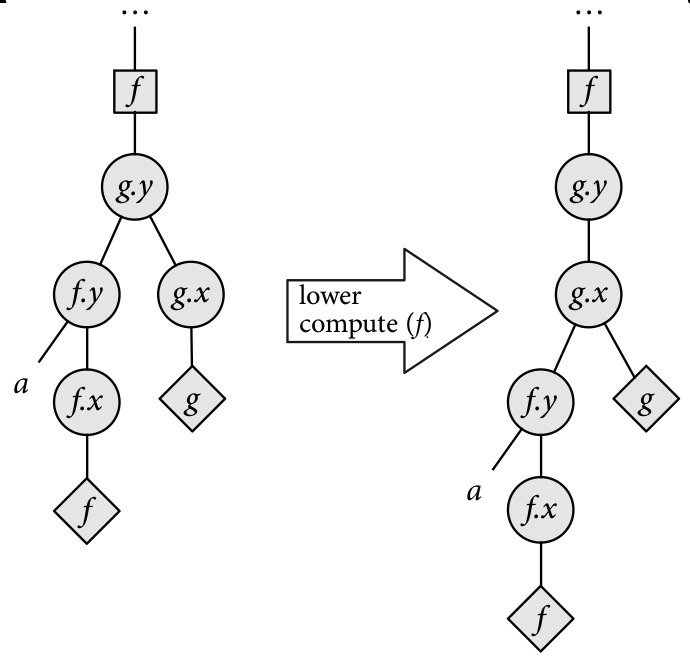 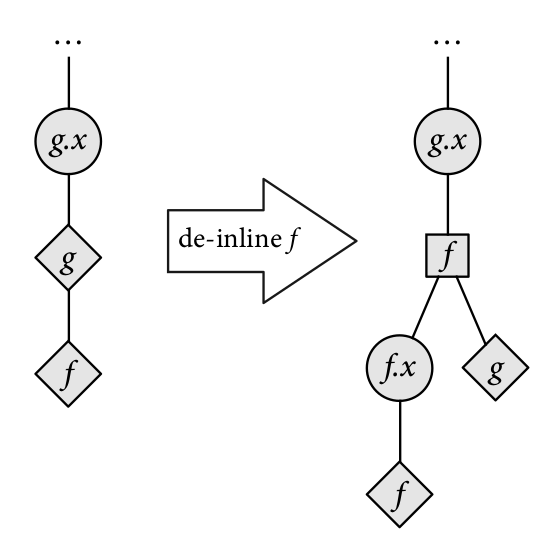 Now that we have a representation for schedules and a set of schedule transformers, we are close to arriving at a search algorithm for finding efficient schedules. The last component that we need is a notion of cost for schedules. In order to provide a cost model for schedules, we need to determine the number of iterations performed by loops in the schedule. This determines the number of times instructions inside the body of loops will be executed, as well as the size of intermediate storage to be allocated. We determine this by computing the extent in which functions will be computed. For the output function, we assume that the extent is given by a call to the realize function. For called functions that are not inlined, the extent is the dimensions of the function that will be stored as intermediate results. Because storage will be reused depending on the granularity with which intermediate results are stored, the extent of called functions does not necessarily coincide with the total extent over which the function will be computed (e.g., the called function might be computed on a per-scanline basis).

For example, consider the simple pipeline below that has one producer (g) and one consumer (f):

Computing the extent in which functions will be computed is hard in general, but since Halide makes the simplifying assumption that all extents are rectangular (as opposed to, say, polytopes in the polyhedral model), there is a simple method for doing this: we only need to check the maximum and minimum points of the caller functions and check the arguments to the callee. Note that we also assume that function arguments are drawn from a grammar of "simple" arithmetic expressions consisting only of +, -, *, /, variables and constants.

We encode these caller-callee relationships into logical formulas and use the Z3 SMT solver to a retrieve model that contains concrete values for the arguments.

Once loop sizes have been inferred, we have enough information to determine important execution features of the schedule, such as how much memory it will allocate and how many operations it will perform. The cost of the schedule is then a weighted sum of these data points.

By default our implementation groups execution features into the following:

Each of these groups has a weight that determines the importance of these features with respect to the schedule's cost (see Evaluation below).

Now that we can give a notion of cost to schedules, we can search for efficient schedules. We use beam search as our search algorithm, with the default schedule as the starting node. We describe the concrete parameters used for search below in Evaluation.

Once we have a candidate schedule tree, we convert it into Halide. We do this by checking the ancestry path from compute nodes: this path determines whether a function's variables are split, the traversal order for computing the function, and, for called functions, the granularity at which the function is stored and computed.

Consider the schedule above for the functions bx, by, and in. Converted into Halide code, the schedule looks like the following:

For the experiments, we set the weights for execution features as follows:

For all benchmarks, the output functions are realized across an extent of 2048x2048. The results below are averaged across three runs.

Note that for the DEF configuration, only the output functions have runtimes associated with them since all called functions are inlined.

The autoscheduler performs rather poorly relative to the default schedule. While it successfully makes space-runtime tradeoffs (e.g., f in Benchmark 1), allowing the computation of a function to run much faster by saving intermediate results, it runs more slowly and uses more memory than the default schedule across all benchmarks.

We believe the poor performance of the autoscheduler has two main causes: