Create a file named add.ml, and in it put the following buggy version of an addition function:

Unit test the function product that you wrote in an exercise above.

Using pattern matching, write three functions, one for each of the following properties. Your functions should return true if the input list has the property and false otherwise.

Consult the List standard library to solve these exercises:

Write a couple OUnit unit tests for each of the functions you wrote in the previous exercise.

Your solutions will be only one or two lines of code each.

Revise your solutions for take and drop to be tail recursive, if they aren't already. Test them on long lists with large values of n to see whether they run out of stack space. Here is (tail-recursive) code to produce a long list:

It would be worthwhile to study the definition of -- to convince yourself that you understand (i) how it works and (ii) why it is tail recursive.

Write a function powerset : int list -> int list list that takes a set S represented as a list and returns the set of all subsets of S. The order of subsets in the powerset and the order of elements in the subsets do not matter.

Hint: Consider the recursive structure of this problem. Suppose you already have p, such that p = powerset s. How could you use p to compute powerset (x::s)?

Give OCaml expressions that have the following types:

Here is a variant that represents a few Pokémon types:

Write a function max_hp : pokemon list -> pokemon option that, given a list of pokemon, finds the Pokémon with the highest HP.

Your function needs to work correctly only for dates, not for arbitrary date-like triples. However, you will probably find it easier to write your solution if you think about making it work for arbitrary date-like triples. For example, it's easier to forget about whether the input is truly a date, and simply write a function that claims (for example) that January 100, 2013 comes before February 34, 2013—because any date in January comes before any date in February, but a function that says that January 100, 2013 comes after February 34, 2013 is also valid. You may ignore leap years.

Write a function earliest : (int*int*int) list -> (int*int*int) option. It evaluates to None if the input list is empty, and to Some d if date d is the earliest date in the list. Hint: use is_before.

As in the previous exercise, your function needs to work correctly only for dates, not for arbitrary date-like triples.

Use the functions insert and lookup above to construct an association list that maps the integer 1 to the string "one", 2 to "two", and 3 to "three". Lookup the key 2. Lookup the key 4.

For each pattern in the list below, give a value of type int option list that does not match the pattern and is not the empty list, or explain why that's impossible. 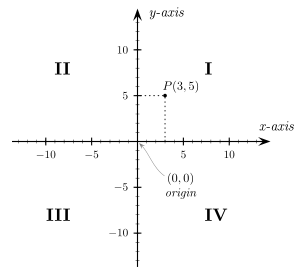 Complete the quadrant function below, which should return the quadrant of the given x, y point according to the diagram on the right (borrowed from Wikipedia). Points that lie on an axis do not belong to any quandrant. Hints: (a) define a helper function for the sign of an integer, (b) match against a pair.

Rewrite the quadrant function to use the when syntax. You won't need your helper function from before.

Write a function depth : 'a tree -> int that returns the number of nodes in any longest path from the root to a leaf. For example, the depth of an empty tree (simply Leaf) is 0, and the depth of tree t above is 3. Hint: there is a library function max : 'a -> 'a -> 'a that returns the maximum of any two values of the same type.

Write a function same_shape : 'a tree -> 'b tree -> bool that determines whether two trees have the same shape, regardless of whether the values they carry at each node are the same. Hint: use a pattern match with three branches, where the expression being matched is a pair of trees.

Write a function list_max_string : int list -> string that returns a string containing the maximum integer in a list, or the string "empty" (note, not the exception Failure "empty" but just the string "empty") if the list is empty. Hint: string_of_int in the standard library will do what its name suggests.

Write two OUnit tests to determine whether your solution to list max exn, above, correctly raises an exception when its input is the empty list, and whether it correctly returns the max value of the input list when that list is nonempty.

Write a function is_bst : ('a*'b) tree -> bool that returns true if and only if the given tree satisfies the binary search tree invariant. An efficient version of this function that visits each node at most once is somewhat tricky to write. Hint: write a recursive helper function that takes a tree and either gives you (i) the minimum and maximum value in the tree, or (ii) tells you that the tree is empty, or (iii) tells you that the tree does not satisfy the invariant. Your is_bst function will not be recursive, but will call your helper function and pattern match on the result. You will need to define a new variant type for the return type of your helper function.

Modify your definition of quadrant to use polymorphic variants. The types of your functions should become these: