Cornell alumni Parag Tole M.S. ’01, Ph.D. ‘03, and Adam Kravetz ’02 established the Dream Grant fund, which provides qualified undergraduate and early graduate students up to $1,000 to pursue a personal project related to their CIS studies. Previous recipients have purchased hardware to develop a robot, deployed an app to reduce student food insecurity, and attended conferences to present their research. Applications are accepted each semester through the Cornell Bowers CIS Student Services office, with the next application window opening in spring 2023.

"At Cornell there is so much opportunity for exploration,” Kravetz said. “I wanted to help students walk their own paths."

Adele Smolansky’s dream is to develop accessible educational resources to help students with disabilities to learn. Smolansky ’23, who is majoring in computer science, was inspired by her younger sister, Lara, who was born with a rare neurological disorder called Rett Syndrome. To help her sister and others with disabilities, she developed AI-Learners, a free learning platform with more than 70 games designed to teach pre-K to second grade math topics to students with physical and cognitive disabilities.

Naturally, Lara was the first to try out the site, but further usability testing confirmed that students enjoyed the games and teachers deemed it an important addition to the curriculum. Now, through additional research projects with Shiri Azenkot’s Enhancing Ability Lab and René Kizilcec’s Future of Learning Lab, Smolansky is enhancing the platform. “There was just so much more that we could do to improve the learning experience for kids playing educational math games,” she said. “I really hope to keep adding ways to help children learn.”

Through her Dream Grant, Smolansky will attend two conferences focused on assistive technology. In October, she presented her research and had an exhibitor booth at Closing the Gap, the premier accessibility conference. There, she spoke with almost two dozen teachers, speech language pathologists, and industry representatives, which led to additional signups on her platform and two invitations to present on AI-Learners to assistive technology groups.

In February, Smolansky will attend the Assistive Technology Industry Association conference to make more connections in the assistive technology space. After graduation, she plans to continue working on AI-Learners as she pursues a Ph.D. in accessible educational technology.

“I'm very grateful to have received the grant,” said Smolansky. “I appreciate all the people who are supporting me and who recognize the need for improving education for children with disabilities.” 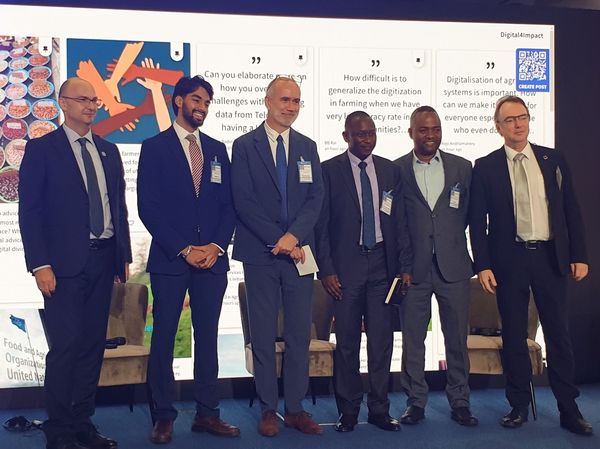 Aggarwal is a computer science major and co-founder of Agcess, a company that seeks to bring digital agriculture solutions to small farms to promote local communities, improve food security, and help meet the population’s growing demand for food. The company created a data management tool, which uses text messaging to collect field data and send information to farmers in areas with poor internet connectivity.

This technology grew, in part, from Aggarwal’s research in Kenya in summer 2022, which was funded by the Cornell Institute for Digital Agriculture (CIDA). He interviewed 20 agricultural startups to understand the technology being used to improve agricultural production around the world.

The World Food Forum selected this work as a finalist in the Transformative Research Challenge, and Aggarwal was invited to speak at the Digitization of Agrifood Systems event, where he participated on a panel and presented his findings. He also had the opportunity to meet many experts in the field.

“For me, this grant was amazing,” Aggarwal said. “Bowers CIS and CIDA were incredibly supportive and the experience ended up being very inspiring. I gained a broader perspective on what kinds of innovations are going on in this space globally, and how people operate at these levels.”

Aggarwal said that attending the forum was “foundational.” He plans to draw on this experience as he plots out next steps for Agcess and ways to realize the platform’s potential to achieve digital transformations for small farmers.

Maitreyi Chatterjee ‘23 and Rishi Malhotra ’23 founded CodeBozu, a Cornell eLab accelerator-backed startup that developed a web platform to teach coding to middle and high school students. They scaled up  to 500 weekly active users, but found sales in the edtech industry to be particularly challenging. So, they pivoted to building a startup, Nylon Rewards, which helps stores on the ecommerce platform Shopify to provide rewards to their customers.

Once 100 Shopify stores implement the rewards program, the team hopes to build cross-brand loyalty partnerships. For example, purchasing a tennis racket at one store would yield rewards to buy protein bars at another store. “When you add more ways for customers to redeem rewards, those rewards become more valuable to them,” Malhotra said. They are also looking into using the blockchain as infrastructure to build rewards partnerships stores.

“We built a startup, scaled to 500 weekly active users – things didn’t work out. So, in the spirit of entrepreneurship, we built another one,” Malhotra said. “We are optimistic this time. We have added three new customers within a week of launching and are looking to add more Shopify stores as we scale.”

Got a dream you want to pursue? Students are eligible to apply to the Dream Grants program if they are an undergraduate who is a declared Bowers CIS major in their sophomore or junior year, or who intends to declare a Cornell Bowers CIS major and has completed at least two of the required courses for the major. First- and second-year Cornell Bowers CIS Ph.D. students who are unaffiliated with a faculty advisor are also eligible to apply. Additionally, all applicants must be enrolled students in good academic standing.

Dream Grant finalists will be selected by a committee appointed by the dean. Recipients must give a presentation to the dean and program donors and submit a written report on how they used their funding, typically within six months of receiving the grant.

Patricia Waldron is a writer for the Cornell Ann S. Bowers College of Computing and Information Science.